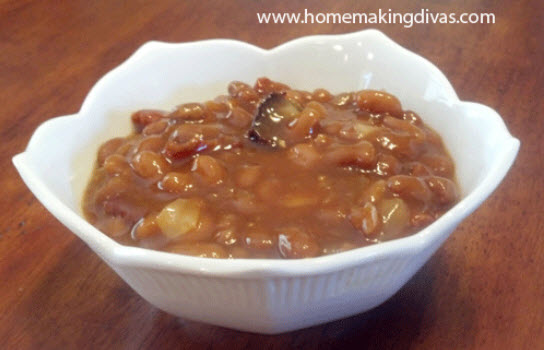 Baked Beans are made in the slow cooker and will stay warm until ready to serve.
Recipe makes 32 to 40 servings so this recipe is perfect for a family gathering and is portable in the slow cooker. Left over baked beans can be frozen.

UPDATE: July 8, 2018
I just added the little video clip of this recipe and wanted to update this webpage because we started smoking bacon to sprinkle on top of these amazing baked beans. We love to use the Traeger to smoke food and we started making this awesome snack we call “Candy Bacon” You put brown sugar on the bacon and then place the strips on the smoker for about 2 hours at 200 degrees until its crispy. We then cut the bacon into pieces and sprinkle it on top the baked beans. It is so dang amazing!