Clam Chowder recipe is one of my favorite soups.  I started making it from the famous Bratten’s recipe, which is heavenly!  I’m not lying, I adore butter!  The problem with this recipe is it comes with a whopping 519 calories per bowl and I can’t eat that way!

The 7 page PDF file has both recipes: 1) low-fat version with fresh ingredients and 2) the meal in a jar recipe.  The PDF file has the printable tags and instructions, and the tag for the thermal cooker instructions.  I like to laminate the tags so that I can insert them into the jar and reuse them. 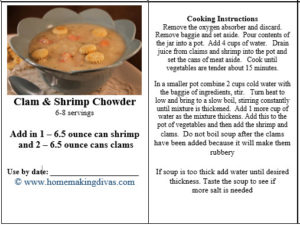 When I make the jars, I like to put a label on the box that I store the jars in.  On the label it tells me I need to grab the cans of Clams and Shrimp when I take the soup jar from food storage.  I also like to write the use by date on the box.   This box label is also on the PDF file.

You can also cook this jar recipe in the Thermal Cooker

Thermal Cooker Cooking Directions:  Remove the oxygen absorber and discard.   Remove baggie and set aside.  Pour contents of the jar into the large inner pot.   Add 5 cups of water.   Drain juice from clams and shrimp into the pot and set the cans of meat aside.   Bring to a boil for 2 minutes and put the lid on it and set the pot into the thermal cooker and close the lid.

In a smaller pot combine 2 cups cold water with the baggie of ingredients, stir.   Turn heat to low and bring to a slow boil, stirring constantly until mixture is thickened.  Add 1 more cup of water as the mixture thickens.

Remove the large pot and set it back on the burner and turn the heat on it again.  Add the milk mixture, stirring, to the large pot of vegetables and add the opened cans of shrimp and clams.  Bring to a boil (but don’t cook longer) remove large pot and put it back into the thermal cooker and lock.   Meal will be ready to eat in 1 hour but will stay hot for about 5-6 hours.  If you need the soup to stay hot longer you can bring water to a boil in the smaller inner pot and put it in the thermal cooker inside of the larger pot and the soup will stay hot 8 hours.  Also note: two bottle of soup mix will fit in the large inner pot if you want to make a double batch