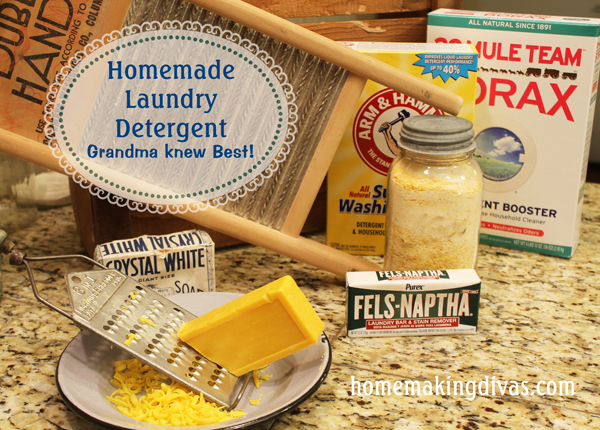 I remember my grandmother sitting at a table in her laundry room grating up a bar of soap but I didn’t follow in her foot steps until 2015. Buying laundry soap was convenient for me but I started noticing Tide wasn’t getting my clothes clean. I was using the Tide Pods when an interesting thing happened. I purchased an off brand of drier sheets and after a couple of batches of laundry the clothing didn’t smell clean. That’s when I realized the bounce drier sheets, that I usually buy, had been masking the unclean laundry smell when I was washing cloths with Tide Pods. I had to start using 2 Tide pods to get my clothes clean.

I also had a new box of Tide Ultra powder that I needed to use up. The scoop has three different measurements on it and I usually do a large load so I was filling the scoop to the second line.   It seemed I was going thru the detergent fast so I started my investigation.

If a 143 ounce box does 102 batches of laundry, as the box advertises it should, my question was “how many ounces was I supposed to use in a batch?”   I got my calculator and figured out that I was supposed to use 1.4 ounces each medium sized load.   I measured 3 tablespoons of Tide in the Tide scoop (that is 1.5 ounces) and to my disappointment 3 Tablespoons didn’t even come up to the first line on the measuring scoop.   The first line is 5  Tablespoons.     That means Tide’s advertising is misleading people about how many loads you will get out of the box.

The Tide box says for a medium sized load you should fill the cup to the first line.   The first line is 5 tablespoons of laundry soap  = 2.5 ounces of soap.   A 143 ounce box will only give you 57.2 medium sized batches of laundry, NOT 102 as the box advertises.

It was that day I decided I would never buy Tide laundry soap again and I started experimenting with homemade laundry detergent recipes.

I cut some white cotton towel fabric into test swatches and started drawing circles with a sharpie marker.   When I explained to the local butcher why I needed a cup of blood he didn’t think I was weird, but after doing 28 laundry swatch tests and getting a second cup of blood ..I admit I turned into a laundry weirdo.  The butcher gave us a tip that day.. if you want to take blood out of white fabric spray it with Peroxide before you throw it into the washer. (Yes, I did stain remover comparisons too).

2)  Grease.  In the beginning I was melting cheddar cheese and used the grease at the top of the circle because it had an orange color that would show up in the pictures better.  I then put bacon grease on the bottom half .   I stopped using the cheese grease because when the soap removed the grease it didn’t remove the orange color and I didn’t want my test result pictures to be misleading.

3)  Dirt from my garden has cow manure in it.   I wet the dirt and rubbed the it down in the fabric so it would stick and then I let the dirt dry

4) Children’s Crayola Washable Markers.  These markers came out of every laundry test without using stain remover.  Washable markers weren’t a great test for the soap.  The problem I found with them is when they got wet the marker color ran everywhere.  I got a drip of wet marker on the fabric of my dining room chair and now I can’t remove it.  That will be one of my next challenges to conquer.

5) Spicy Brown Mustard.  Nothing got these stains clean, not even using stain remover products

6) Ketchup I made up a bunch of stained swatches and to Tide’s advantage I started washing the swatches with Tide first and those stains sat on the fabric overnight before washing.   The homemade recipes had been setting on the swatches for 2 days to 2 weeks because I would throw a swatch in the laundry I was washing at the time.  All of the homemade recipes I tested had been sitting longer and cleaned better than Tide.

I started with the 3 Tablespoons of Tide because wanted to see what the laundry would look like if we got 102 batches out of the box.   It still frustrates me I bought into Tide’s advertising.

After I had the Tide laundry completed I started making homemade laundry detergent recipes.

Recipe #1 was the recipe I was given in the class that I took at Honeyville Grains in Salt Lake City, UT.   I love this recipe. It makes the laundry smell really clean and I was really happy the fabric didn’t smell like bacon grease.  The first swatch I washed with this recipe I only used 1 tablespoon for a large batch so it costs $.03-04 cents per batch.  This test looked a little better then Tide so I was happy it cleaned as good as the leading name brand of soap.   The good smell of the soap doesn’t linger and the fabric becomes orderless. Because I wanted to try and get the laundry cleaner than the job that Tide does I decided to do another batch with 2 Tablespoons of Recipe #1.  It was a lot cleaner than the Tide swatch and I didn’t pretreat the stains with stain remover.   Also keep in mind.. I did 5 Tbl Tide in a Medium batch = 7 Tablespoon for a large batch of laundry and this Recipe #1 only took 2 Tablespoons for a large batch.

This recipe is very easy to make and only costs $.03-$.04 cents per batch. The recipe makes 56 Tablespoons and 1-2 Tablespoons is used per large batch of laundry. Use one tablespoon, if you have a high-efficiency (HE) machine. 2 Tablespoons for top loader machine

Recipe #1 has more Fels-Naptha Soap in it than the other recipes so it is more concentrated. Fels-Naptha bar of soap can also be rubbed on stains to help remove them. In my laundry comparison experiment I used 1 Tablespoon of soap in a full batch of laundry with warm water. Recipe #1 makes 56 tablespoons. The Soap can be grated on a cheese grater or it can be chopped in the food processor.  One of the reviews I found on the internet was negative about making homemade laundry soap because she couldn’t get the soap off the food processor/grater. I didn’t have a problem with that but I used hot water and when I couldn’t get the soap off easily around the grater slots I used some vinegar on a scrub brush.

I found Recipe #2 on the website How Does She I was excited to try something that had OxyClean. I felt this recipe needed a little bit of the scent booster because I didn’t care for the smell of the Zote Soap. The Zote smell is ok but I like the scent of the Fels-Naptha Soap better.    The Website How does she recommends 1 to 2   55 ounce bottles of the Purex Crystals Fabric Softener and I only used1 – 18 ounce bottle.    The laundry did smell wonderful but the good smell didn’t stay in the clothing after laundry day. I used 2 Tablespoons of this recipe in each batch of laundry.  If you put more Scent booster you will need to add more laundry soap to the batch.

Instructions: Grate Zote Soap with cheese grater or food processor Mix all ingredients together in a large bucket lined with a good quality garbage bag. I found it was easier to remove the bag and mix the soap by moving the bag around and stirring the powders with my hand. Pour the powder from the bag to a storage container. Use 2-4 Tablespoons per laundry load.       Cost:   I paid $20.84 (plus tax) for 272 ounces.  I used 2 tablespoons per batch (1 ounce) so I got 272 batches from this recipe, costing $.08 per batch

I like the website One Good Think by Jullie  and I posted her Youtube video about how she makes laundry soap because I really liked her idea about mixing it in the garbage bags.  I mixed Recipe #2 this way but I put the garbage bags in a clean bucket first so I would have something to hold the bags open while I added ingredients. Recipe #3 that I tested is her recipe in this video.

Recipe #2 cleans about the same as Recipe #1.   More detergent is needed because of the Scent Boost that was added.  I didn’t want to add a lot of Purex Crystals because I knew it would drive up the cost.  When I first washed the fabric swatch it seems I added the right amount, however, the good smell faded and then I noticed a faint smell of the bacon grease.   Even though the stains came out good with this recipe it needs scent booster to hide the smell that didn’t come out of the fabric.

Another reason why I wanted to try this recipe is because I was inspired to make pink heart shaped laundry tables to give to my friends for Valentines day.

The tablets were so easy to make!

I mixed 1 cup of laundry detergent (any detergent will work also) I used Recipe #2 with Pint Zote Soap and Pink Purex Crystals.

Put the cup of soap in a mixing bowl and add 3 Tablespoons of white vinegar. Mix well until the powder is moist.

Pack mixture into 1 Tablespoon measuring spoon and then put the mixture into a mold cavity and press the mixture with a spoon, packing it evenly. Fill each cavity with one tablespoon of soap. If you have a little extra damp soap left in the bowl you can add a little bit of soap to the cavities until it is gone.

Let the tablets completely dry before removing them from the mold.
A pint sized jar will hold 12-14 tablets.

The printable file has a “To-From” jar topper and the tag for the jar.  It also has a pattern to cut a circle of fabric.   I placed the fabric over the metal lid and then screwed the metal band on the jar.   Tie some jute cord around the jar and tie a bow.  I found some mini clothes pins in the scrapbook section of the craft store and pinned the tag on the jute cord around the jar.  (clothes pins optional and are not pictured)

The cute gifts were a big Valentine’s hit!  This gift can be given any time of the year

Recipe #3 soon to come. Also watch for the comparison results

Use 2 tablespoons per load. Put it right in the barrel if you have an HE washer.

Create your own review
Average rating:   4 reviews
by Brenda on
recipe #1 Is awesome!

I made recipe #1 a few weeks ago and used 1 tablespoon of unstoppable scent booster and it was awesome! My laundry was very clean and it smells so dang good. My folded.laundry in the drawers comes out smelling as fresh as the day I washed it. Tks for the great Web page and all the research.

Thanks, I love it and have been using it for a while now. I'll never use anything else 🙂

by Susandu on
Great job

You Did a Great Job With The Comparison! Love this Web page .. thanks

by Tracy on
Making soap

Learned lots of new tips and tricks from this homemaking diva! Thanks Stacy for the fun night and leaning a new skill plus the soap smells amazing!

by Telly on
I love this soap!

I'm so excited to wash my clothes. this soap is awesome n easy to make. . Also better quality getting stains out and did u say cheaper. . Yeah!